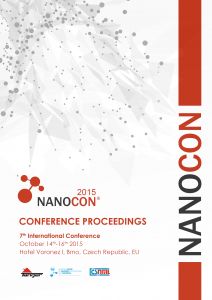 An opportunity to become acquainted with the results of research and development of nanomaterials in the Czech Republic and abroad as well as to meet the world's leading scientists working on nanotechnology and to debate with them had participants of the seventh annual international conference NANOCON'15. This event was organized by the Czech Society for New Materials and Technologies on 14 - 16, October 2015 in Brno, in cooperation with the Regional Centre of Advanced Technologies and Materials (RCPTM) at the Faculty of Science of Palacky University in Olomouc and with the company Tanger Ltd.

During the three days of the conference almost 80 lectures on 5 different thematic areas were presented for more than three hundred participants from 30 countries. NANOCON´15 confirmed that it is the largest event of its kind organized in the Czech Republic and at the same time it is one of the largest conferences in the field of nanotechnology in the Central European region. About one third of all participants came to Brno from abroad this year, the most from Germany, Russia and Slovakia. The research results presented in Brno also scientists from distant countries, including U.S.A., Japan, India, China or Peru.

The opening plenary lecture entitled "Dimensionality and Strong Electron Correlation in Nanoscience”, was performed by Professor Louis E. Brus from the Columbia University in New York (U.S.A.), the discoverer of quantum dots. The application of these semiconductor nanocrystals in electronics, such as television and soon also in computer monitors, is expected to bring significantly better image (e.g. in comparison with LEDs), as well as lower power consumption. Another plenary speaker Professor Patrik Schmuki from the Friedrich-Alexander University Erlangen-Nurnberg (Germany) in his lecture "Formation and Functional Features of Self-ordered TiO2 Nanotube Arrays” outlined the wide range of applications of photocatalytic materials.

Other lectures of five thematical sessions were related to preparation of nanomaterials, to their unique properties, applications and also to their toxicity, including monitoring. Participants could hear the lectures focused on various nanomaterials, based on zero-valent iron, silver or zinc, but also related to quantum dots, nanocomposites, carbon nanostructures, materials for electronics and optics, nanoceramic materials or nanofibres. Samuel Sánchez from Max Planck Institute for Intelligent Systems in Stuttgart (Germany) attracted the attention of the participants by his lecture focused on catalytic self-powered nano-bots and their applications as nano-tools for delivery drugs or for water treatment. Jan Macák from University of Pardubice (CZ), this year's Neuron prize winner for young scientists, presented in Brno his research focused on coatings of TiO2 nanotubes, a material of unprecedented functionality and potential, particularly for effective photovoltaic cells. It is not an occasion that his ambitious research has been supported by the prestigious five-year grant from the European Research Council, this year.

The attention of raised lectures relating to applications of nanomaterials in medicine, for example for wound healing, tissue engineering or tumor imaging. María  del Puerto Morales from the Institute of Material Science of Madrid (Spain) fascinated the audience by her research results in the field of magnetic nanoparticles of very high hopes in medical diagnostics, particularly at magnetic resonance imaging. Tomas Etrych from the Institute of Macromolecular Chemistry AS CR in Prague (CZ)demonstrated the progress of his group in research of polymer nano-therapeutic for overcoming drug resistance during cancer treatment. The programme of the conference accentuated also the issue of impact of nanomaterials on human health and nature. Marie Dusinska from the Health Effects Laboratory of the Norwegian Institute of Air Pollution in Kjeller (Norway) attracted the attention of the participants by her talk explaining the impact of size and surface properties on genotoxicity of nanosilver.

The award of Dr. Tasilo Prnka (the promoter of nanotechnology in the Czech Republic), for the best lecture of young scientists under the age of thirty three years received Kristian Petruf from Univerzity of Pardubice (CZ) for the lecture „Specification of Emission Colour of Li-doped ZnO Colloids“.

In the poster session 170 posters had been performed. Their scientific content and graphic design have been assessed by a professional jury. As the best one was evaluated the poster of Wang Dong from the Technical University Illmenau (Germany) illustrating the tuning of the microstructure of hydrogenated TiO2 for energy storage and conversion. Among the top three the poster of Jan Lukasek from the Technical University of Liberec (Czech Republic) describing a method of production of new aligned conductive microfibers for tissue engineering.

The conference NANOCON'15 confirmed that this event becomes a popular meeting place for Czech nanotechnology community. In total 12 universities, 10 research institutes of the Academy of Sciences and other research organizations, such as the State Office for Nuclear Safety, the Public Health Institute or the Institute of Nuclear research or the Czech Metrology Institute. Participation of representatives of 20 private sector entities, typically innovative companies with strong research background, in Brno confirms that it is a long time since nanototec hnology R&D leaving the lab. For example, the experts from the biotechnology company Contipro Biotech from Dolní Dobrouč (CZ) – the producer of hyaluronic acid - presented a novel nanofibrous materials made of chemically modified hyaluronic acid. Plasma systems for plasma modification of various materials developed by spin-off ROPLASS from Brno (CZ) presented its director, professor Mirko Černák. The interest of the business sector in nanomaterials is illustrated by the fact that 13 companies exhibited their products and demonstrated laboratory and measuring equipment in the conference accompanying program. "This year's conference underlined the dynamic increasing quality of research of nanomaterials in the Czech Republic and the emphasis on R&D to be finalized in concrete industrial, medical or environmental applications. However plenty of great contributions from fundamental research have been presented in the conference. Such continuity is exactly what an excellent science needs,” says Professor Radek Zboril’, the director of the Regional Centre of Advanced Technologies and Materials. As the chairman of the conference he is pleased by the growing interest of experts from abroad to establish cooperation with Czech experts. Some of them do not hide their surprise of the wide spectrum of research topics in a small country like the Czech Republic, erudition Czech researchers, modern equipped laboratories and the results achieved.

More information about the conference is available at www.nanocon.eu.

STRAIN ENGINEERING OF THE ELECTRONIC STRUCTURE OF 2D MATERIALS

Download
ELDESSOUKI Mohamed Department of Textile Technologies, Technical University of Liberec, Liberec, Czech Republic, EU, mohamed.eldessouki@tul.cz
Co-authors: SHADY Ebraheem GOWAYED Yasser
Abstract: Nanocomposites with exceptional properties are promising materials that gain a market share during the current years. Multi-walls Carbon nanotubes (MWCNTs) can be used as a filler for polymeric matrix; however, their attractive forces lead to their agglomeration and affect the properties of the final nanocomposite. [..] Read more

CALCULATIONS OF NANOCRYSTALLINE DIAMOND-COVERED WAVEGUIDES BASED ON AMORPHOUS SILICON

POLYPROPYLENE/GRAPHITE COMPOSITES AND THEIR THERMAL STABILITY

Download
ČERNOHORSKÝ Ondřej Institute of Photonics and Electronics of the CAS, Chaberská 57, Prague, 18251, Czech Republic
Co-authors: GRYM Jan YATSKIV Roman PHAM Viet Hung HUDRY Damien DICKERSON James H.
Abstract: Platinum is a transition metal known for its catalytic properties, which are further enhanced when employed in a nanoparticle form. We have recently shown that a monolayer of Pt nanoparticles deposited on semiconductor substrates forms high quality Schottky diodes, which were used in sensitive hydrogen sensors with a detection limit of 1 ppm of H2 in N2. [..] Read more

Download
KELAR Lukáš Department of Physical Electronics, Faculty of Science, Masaryk University, Brno, Czech Republic, kelar@physics.muni.cz
Co-authors: BURŠÍKOVÁ Vilma
Abstract: The aim of the present work was to deposit thin polymer-like films fulfilling several criteria in order to enable their industrial application as protective coatings on various materials, for example plastic substrates. Therefore the films have to be stable, wear resistant with good adherence to the substrate materials and they have to be resistant against mechanical damage. [..] Read more

LAYERED SILICATE AS A MATRIX FOR GRAPHENE

Download
KULHÁNKOVÁ Lenka VSB - Technical University of Ostrava, Faculty of Metallurgy and Materials Engineering Ostrava, Czech Republic, EU
Co-authors: TOKARSKÝ Jonáš ČAPKOVÁ Pavla MAMULOVÁ KUTLÁKOVÁ Kateřina PEIKERTOVÁ Pavlína NEUWIRTHOVÁ Lucie BEŇO Jaroslav STÝSKALA Vítězslav
Abstract: Montmorillonite was found to be useful matrix for the direct preparation of graphene sheets from conducting polyaniline in the interlayer space of montmorillonite. Oxidative polymerization of the solution of anilinium sulfate by ammonium peroxydisulfate in the presence of montmorillonite particles led to the formation of polyaniline chains both on the surface (revealed by SEM analysis) and in the interlayer space of montmorillonite (proved by a combination of X-ray diffraction analysis and molecular modeling). [..] Read more