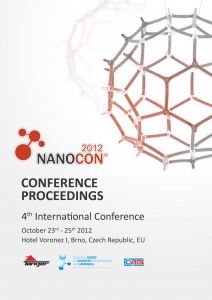 An opportunity to become acquainted with the results of research and development of nanomaterials in the Czech Republic and abroad, to meet the world's leading scientists working on nanotechnology and to debate with them had participants of  IV. International conference NANOCON'12 had in Brno on 23 - 25 October 2012. This event was organized by the Czech Society for New Materials and Technologies in cooperation with the Regional Centre of Advanced Technologies and Materials Science of Palacky University Olomouc and the company TANGER Ltd.

During the three days of the conference 99 lectures focusing 5 different thematic areas of research and applications of nanomaterials were presented for the 359 participants from 29 countries on five continents. Compared to the NANOCON´11 not only the absolute number of participants slightly increased, but significantly (to 40%) the number of experts from abroad scaled up. The conference NANOCON thus confirmed to be the largest nanotechnology event organized in the Czech Republic and at the same time one of the largest conference in the field of nanotechnology in the Central European region.

The opening plenary lecture entitled "Anything You Can Do I Can Do Better. What Can Be Done Better with Sonochemistry" was performed by the world's leading chemist Professor Dr. Aharon Gedanken from Bar-Ilan University in Ramat Gan, Israel. He is the founder of sonochemistry - discipline, in which chemical reactions are accelerated using ultrasonic waves. And the whole professional life he devoted to applied scientific research (A. Gedanken is the author of 34 international patents). In his lecture he mentioned the project of the "hospital of the future" in which all textiles such as bed linen, towels, curtains, pyjamas, medical garments, etc., retain antibacterial properties for up to 65 wash cycles at 92 ° C due to nanoparticles.

Another plenary speaker - Professor Paul Mulvaney from the University of Melbourne, a world-class expert on nanocrystals, in his paper "Not All That´s Gold Does Glitter" outlined some unusual optical properties of small metallic nanoparticles and opportunities to influence the chemical reactions at the individual nanoparticles.

Video from the plenary session can be seen here.

Other lectures were related to nanomaterials, their characterization and preparation, as well as nanostructured metallic materials, nanosilver, nanocomposites, carbon nanostructures and materials for electronics and optics, nanoceramic materials, nanofibers and their application areas such as solar energy, medicine, water purification, etc. The programme of the conference accentuated also the issue of influence of nanomaterials on the environment and human health, as well as the standardization of various procedures related to the characterization and use of nanoparticles.

The lecture of Professor Andre Skirtach from the Max Planck Institute of Colloids and Interfaces in Potsdam (Germany) attracted the attention of the participants. He described the preparation and characterization of films and capsules containing inorganic metal nanoparticles and their applications in biomedicine, for example for study responses of immune system. Dr. Tomas Jungwirth from the Institute of Physics of the Academy of Sciences CZ in his speech introduced one of the fastest growing scientific field - spintronics. Breakthroughs achieved in this segment of nano-electronics using electron spin processing, transmission and storage of information has caused a revolution in the electronic data storage already. And as the world-acclaimed Czech scientist indicated next breakthroughs in spintronics can be expected soon.

The award of Dr. Tasilo Prnka, a promoter of nanotechnologies in the Czech Republic, has been awarded for the first time at the conference NANOCON for the best lecture of young scientist (up to 30 years). Bogdan Parakhonskiy from the University of Trento in Italy for a lecture Biocompatible Calcium Carbonate ParticlesToward Drug-Delivery Applications” is the first laureate of this award. Honourable mention went to Japan for Veeranarayanan Srivani of Toyo University from Kawagoe for her contribution regarding the use of nanoparticles in the treatment of cancer metastasis.

In the poster section a total of 210 posters had been performed. The poster of Chauhan Ashoka, a talented scientist from the University of Bath in the UK, showing piezoresistive sensing using carbon nanotubes was selected by the professional jury as the best one -for its novel scientific content and imaginative graphic design. The poster of the team of the Professor Paul Danihelka of VSB-Technical University of Ostrava was evaluated among the three best posters of the conference. It demonstrated a new way to radon decontamination of polluted water using special nonporous membranes. The jury highlighted the uniqueness of the patented technology and the fact that its application for the decontamination of small water resources has been already prepared. Honourable mention for an interesting poster was awarded to six other experts.

The conference NANOCON'12 confirmed that this event becomes a popular meeting place for Czech nanotechnology community. In total 13 universities, 11 research institutes of the Academy of Sciences of the Czech Republic and other research organizations such as the National Institute of Nuclear Safety, Public Health Institute and the Czech Metrology Institute, and several dozen private-sector entities private research organizations (eg SYNPO, SVÚM) or production companies with strong research backgrounds (eg Contipro Biotech, SPUR, TESCAN presented their results in the field of nanomaterials in Brno.

For example, a joint team of several Czech research institutions (Institute of Physics Academy of Sciences of the Czech Republic, SYNPO, Institute of Experimental Medicine AS CR, Institute for Clinical and Experimental Medicine and Institute of Chemical Technology) co-ordinated by Dr. Emil Pollert from the Institute of Physics AS CR, demonstrated promising results of in-vivo experiments of the newly developed nanomaterial with ferromagnetic nanoparticles, which should significantly facilitate and refine the diagnosis of cancer magnetic resonance imaging and cancer therapy using magnetic fluid hyperthermia. Dušan Kimmer from Zlin company SPUR Inc. showed new nanofiber filters enable removal of harmful bacteria from wastewater.

"This year's conference confirmed the high quality of research of nanomaterials in the Czech Republic as well as the growing interest of experts from abroad to establish cooperation with Czech experts. Some of them do not hide their surprise of the spectrum of research topics in a small country like the Czech Republic, erudition of our researchers, laboratories equipped with hi-tech instruments and results achieved, " says Professor Radek Zbořil, Director of the Regional Centre of Advanced Technologies and Materials Research Center, the conference chairman. His words were confirmed by Professor Stefan Vajda from Argonne National Laboratory in the U.S., whose research group develops new metallic nanomaterials for use in bio-applications with the researchers of Palacky University in Olomouc. Professor Ehrenfried Zschech from the Fraunhofer Institute for Non-Destructive Testing, based in Dresden, otherwise also the president of the Federation of European Materials Societies (FEMS), in Brno expressed his interest to co-operate with the Brno research center CEITEC.

About 40 percent of the participants came from abroad this year (in 2011 it was a quarter). Most foreign participants came from Germany, Romania, Slovakia, and Poland. The research results in Brno also presented scientists from more distant countries, including Australia, China, USA, Japan, India and South Korea. For example, Andrey Rogach, Professor of the City University of Hong Kong and one of the fifty best material scientists of the world, presented on NANOCON several techniques of the design of semiconductor nanocrystals hybrid functional nanostructures and their wide range of applications such as power transmission or biological markers. Professor Miro Zeman from Delft University of Technology in the Netherlands has focused on the use of nanomaterials and nanotechnologies for new technologies in photovoltaic.

Products and laboratory and measuring technology such as electron microscopes, spectrometers, analyzers size and particle surface and other apparatus for the characterization of nanomaterials, and laboratory chemicals and other materials were exhibited during the conference altogether by 18 companies.

More information about the conference is available at www.nanocon.cz. Next year's conference NANOCON´13 will be held again in Brno on October 16th to 18th, 2013.