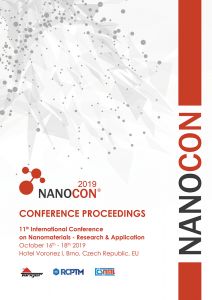 Nano Energy  - the Highlight of the NANOCON´19 Conference

The XI. International conference NANOCON took place in Brno in October 16th - 18th, 2019. In total 334 attendees from 30 countries across the world listened 75 lectures and could see 205 posters. Their common theme was nanomaterials and the latest advances in their research and applications. The conference is the largest event of its kind organized in the Czech Republic and belongs to the biggest ones held in the Central Europe.

Nanotechnology and nanomaterials in energy sector was the highlight topic of the NANOCON´19. The reason is obvious.  How to generate and store enough clean electricity is one of the key challenges of the today´s world. After all, Nobel Award in chemistry was awarded for the discovery of lithium ion batteries this year. And the potential of nanomaterials to respond successfully to this challenge is very promising.

Prof. Niyazi Serdar Sarıçiftçi the director of the Institute of Organic Solar Cells from Johann Kepler University in Linz, Austria emphasised this fact in his opening plenary lecture. This renowned material scientist presented the results of his research in the field of optical technologies. He stressed the need to use biodegradable and biocompatible materials in organic optoelectronics. Their further use is very wide - not only in solar energy, but also in biomedicine, for example. Nano-energy was also the central topic of a panel discussion. In addition to methods of energy generation by various types of cells, the issues of energy storage by batteries or supercapacitors were discussed as well. And the environmental aspect of nano technologies and nano materials used in energy sector was not neglected either.

However, the thematic scope of the conference was traditionally much broader. In Brno researchers presented their R&D results regarding the preparation, characterization of nanomaterials and their use in various sectors, including the environment and medicine. Monitoring and issues of nanomaterial toxicity as well as their impact on health and the environment were also discussed. The next plenary lecture of Prof. Martin Pumera from University of Chemistry and Technology Prague, who returned to the Czech Republic after eight years of successful research at Nanyang Technological University in Singapore, attracted deserved attention in this respect. As the director of the Center of Advanced Functional Nanorobots he outlined the fascinating possibilities of these self-managed molecular nanostructures, for example in targeted drug delivery or in environmental remediation.

The prize for the best poster has been awarded to Ondřej Pavelka from the Faculty of Mathematics and Physics, Charles University in Prague. This Young scientist in his poster presented, how is possible to optimize the fabrication of hybrid metal-semiconductor Au-Si nanostructures for plasmon enhanced luminescence. Luminescent silicon nanocrystals represent a promising alternative to the conventional semiconductor nanocrystals, especially for biological applications and Czech researchers collaborate on this research task with experts from the Kobe University in Japan.

Jan Přech from the Centre of Advanced Materials of Charles University in Prague presented the Best Lecture for the Young Scientist (up to 33 years of age). The price named after Dr. Tasilo Prnka - a major promoter of nanotechnology in the Czech Republic - he received for a lecture relating to advanced titano-silicate catalysts for selective oxidation of terpenes. On research of these nano-sponges Czech researchers work with scientists from the Center for Nanomaterials and Chemical Reactions of Institute for Basic Science in South Korean Daejon.

The next NANOCON conference will be held in October 21st – 23rd 2020 and it will accentuate the latest scientific and technological challenges in nano-electronics. More information can be found at www.nanocon.eu.

Download
Ledentsov Nikolay VI Systems GmbH, Hardenbergstr. 7, 10623 Berlin, Germany, nikolay.ledentsov@v-i-systems.com
DOI: https://doi.org/10.37904/nanocon.2019.8446, 14-21
Abstract: “Quantum dot (QD)” or, other name, “quantum box”, represents an ultimate case of size quantization in solids, where the motion of the charge carriers is restricted in all three dimensions (3D). The critical condition for the formation of truly atom-like density states is a high quality of interfaces surrounding such nano-objects. [..] Read more

A NOVEL ROUTE OF SYNTHESIS OF SULPHUR-DOPED G-C3N4

THE ROLE OF MICROWAVE PLASMA TEMPERATURE DURING GRAPHENE NANOSHEETS DEPOSITION ON DIELECTRIC SUBSTRATE: MODELLING AND EXPERIMENT

Download
Horazdovsky Tomas Faculty of Mechanical Engineering, Czech Technical University in Prague, Czech Republic, EU.
Co-authors: Drahokoupil Jan Jindra Jakub Vlcak Petr
DOI: https://doi.org/10.37904/nanocon.2019.8706, 103-107
Abstract: An in situ investigation has been carried out by X-ray diffraction of the evolution of the crystallite size and the microstrain of low-temperature annealed commercially pure titanium grade 2 in the state after machining and polishing. Annealing was performed in vacuum at a temperature of 300, 400 and 500°C, with various dwell times. [..] Read more