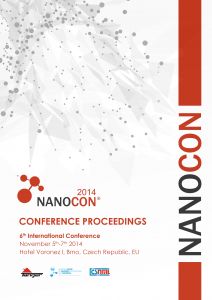 An opportunity to become acquainted with the results of research and development of nanomaterialsin the Czech Republic and abroad as well as to meet the world's leading scientists working on nanotechnology and to debate with them had participants ofthe sixth annual international conference NANOCON'14. This event was organized by the Czech Society for New Materials and Technologies on 5 - 7, November 2014 in Brno, in cooperation with the Regional Centre of Advanced Technologies and Materials (RCPTM) at the Faculty of Science of Palacky University in Olomouc and with the company Tanger Ltd..

During the three days of the conference almost 90 lectures on 5 different thematic areas of research and applications of nanomaterials were presented for four hundred participants from 35 countries of four continents. NANOCON´14 confirmed that it is the largest event of its kind organized in the Czech Republic and at the same time one of the largest conference in the field of nanotechnology in the Central European region.

The opening plenary lecture entitled "The Advent of Mesoscopic Solar Cells“,was performed by Professor Michael Graetzel from the Ecole Polytechnique de Lausanne (Switzerland), selected by the Scientific American as one of the 50 top researchers in the world. He pioneered research on energy and electron transfer reactions in mesoscopic-materials and their optoelectronic applications and he pioneered also the use of nanomaterials in lithium ion batteries. In Brno Michael Graetzel presented the latest results of recent experiments relating new solar cells based on perovskites and hybrid materials. These cells present power conversion efficiency 18% and it is supposed this parameter will be significantly improved in the future. Another plenary speaker - Professor Krzysztof Matyjaszewski from the Carnegie Mellon University in Pittsburgh (U.S.A.), the author of 50 patented technologies, confirms his reputation as a global guru in the field of polymer chemistry. In his lecture "Nanostructured Functional Materials by Taming Radicals", outlined the wide range of applications of polymer materials for nanomaterials used in medical sector, cosmetics or electronics.

Other lectures were related to nanomaterials, their preparation and unique properties, applications and also to their toxicity. Participants could hear the lecturesfocused on various nanomaterials, like zero-valent iron, gold or silver or titanium, but also related to quantum dots, nanocompozites, carbon nanostructures including graphen, materials for electronics and optics, nanoceramic materials or nanofibres. Professor Mario Ruben from the Karlsruhe Institute of Technologies (Germany) attracted the attention of the participants by his lecture focused on possibilities of supramolecular quantum spintronics. Bohuslav Rezek from The Institute of Physics Academy of Sciences CZ presented wide applied potential of nanocrystalline diamond thin films in electronics, chemistry and biology. Alexander Riss from the Vienna University of Technology (Austria) demonstrated the possibilities of scanning tunneling microscopy and spectroscopy (STM/STS) to image precise molecular chemical bonds.

Participants had also a possibility to hear lectures relating to applications of nanomaterials in medicine, for example for wound healing, tissue engineering or tumor imaging. Professor Alexander Eychmüller from the Technical University of Dresden (Germany) presented the progress of his research group in the field of porous three dimensional nanoparticle hydrogels to be used as a bio-catalysis and a fluorescence signaling unit in the development of optical biosensors. The programme of the conference accentuated also the issue of impact of nanomaterials on human health and nature. Eleonore Fröhlich from the Medical University of Graz (Austria) attracted the attention of the participants by presentation of in-vitro tests identifying of long-term effects of nanoparticals (like polystyrene particles, carbon nanotubes, and silica nanoparticles) included in food, consumer and medicinal products, as well as being present in the environment, to human body.

The award of Dr. Tasilo Prnka (the promoter of nanotechnology in the Czech Republic), for the best lecture of young scientists under the age of thirty three years received Simona Steponkiene from the National Cancer Institute in Vilnius (Lithuania). Her lecture was focused on application of functionalized quantum dots in targeted cancer therapy.

In the poster session 250 posters had been performed. Their scientific content and graphic design have been assessed by a professional jury. As the best poster has been evaluated the work of Alexander Kromka from the Institute of Physics Academy of Sciences CZ showing fabrication of 3D diamond membranes for microfluidic systems. Among the top three the poster of Fatma Yalcinkaya from the Textile Faculty of Technical University Liberec (CZ) describing production of antibacterial textile material by weaving electro spun PVB/copper oxide nanocomposite fiber covered yarn.

The conference NANOCON'14 confirmed that this event becomes a popular meeting place for Czech nanotechnology community. In total 14 universities, 11 research institutes of the Academy of Sciences and other research organizations, such as the State Office for Nuclear Safety, the Public Health Institute and the Czech Metrology Institute. Participation of representatives of 25 private sector entities, typically innovative companies with strong research background, in Brno confirms that it is a long time since nanototechnology R&Dleaving the lab. For example, the experts from the biotechnology company Contipro Biotech from Dolní Dobrouč (CZ) – the producer of hyaluronic acid - presented a novel nanofibrous materials made of chemically modified hyaluronic acid. Petr Straka from the company ASIO from Jiříkovice (CZ) demonstrated the possibilities of nanofiber filters for air filtration in water supply facilities. Plasma systems for plasma modification of various materials developed by spin-off ROPLASS from Brno (CZ) presented its director, professor Mirko Černák.

"This year's conference underlined the dynamic increasing quality of research of nanomaterials in the Czech Republic and the emphasis on R&D to be finalized in concrete industrial, medical or environmental applications. However plenty of great contributions from fundamental research have been presented in the conference. Suchcontinuityisexactly whatscience needs,” says Professor Radek Zboril’, the director of the Regional Centre of Advanced Technologies and Materials. As the chairman of the conference he is pleased by the growing interest of experts from abroad to establish cooperation with Czech experts. Some of them do not hide their surprise of the wide spectrum of research topics in a small country like the Czech Republic, erudition Czech researchers, modern equipped laboratories and the results achieved.

His words were confirmed by Professor Rajender Varma from the United States Environmental Protection Agency from Cincinnati (U.S.A.) whose research group collaborates with the experts from the Olomouc Centre RCPTM in nanomaterial applications of heterogenic catalysis. Professor Bengt Fadeel from Stockholm Karolinska Institut (Sweden), who specializes in the toxicity of nanomaterials, including carbon nanotubes and graphen, and their impact to the human immune system, discussed in Brno the next collaboration with the Institute of Experimental Medicine Academy of Sciences (CZ). And Marja Perović from the Institute of Nuclear Sciences Vinca in Belgrad (Serbia), the expert in the characterization of magnetic nanoparticles, negotiates the continuation of the common research with the colleagues from the Institute of Physics of Materials Academy of Sciences (CZ).

More than 40 percent of the participants came from abroad this year. The most foreign participants came from Russia, Slovakia, Poland and Germany. The research results presented in Brno also scientists from distant countries, including U.S.A., China, Brazil, India or Japan. The interest of the corporate sector in nanomaterials illustrated by the fact that 13 companies exhibited their products and demonstrated laboratory and measuring equipment in the conference accompanying program. More information about the conference is available at www.nanocon.eu.