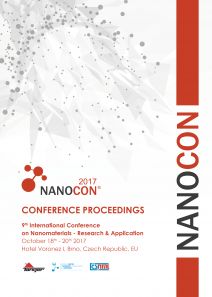 An opportunity to become acquainted with the results of research and development of nanomaterials in the Czech Republic and abroad as well as with concrete applications and to meet the world's leading scientists working on nanotechnology had participants of the ninth annual international conference NANOCON'17. This event was organized by the company TANGER Ltd. on 18 - 20, October 2017 in Brno, in cooperation with the Czech Society for New Materials and Technologies and the Regional Centre of Advanced Technologies and Materials (RCATM) at the Faculty of Science of Palacky University in Olomouc.

During the conference in total 90 lectures and 200 posters were presented for 350 participants from 26 countries. NANOCON´17 confirmed that it is the largest event of its kind organized in the Czech Republic and at the same time it is one of the largest conferences in the field of nanotechnology in the Central European region.  About one third of all participants came to NANOCON from abroad this year, the most from Russia, Poland, Germany, Slovakia and Rumania. The research results presented in Brno also scientists from distant countries, including China, South Korea or U.S.A.

The opening plenary lecture entitled "Opportunities and Challenges of Well-defined Nanocatalysts” was performed by Paolo Fornasiero from the University in Trieste (IT). This outstanding expert in design and development of multifunctional nanosystems allowed to audience to uncover secrets of environmental heterogenic catalysis. Another plenary speaker Lukáš Palatinus from the Institute of Physics of the Czech Academy of Sciences, this year's Laureate Prize for Young Scientists of the Neuron Endowment Fund to Support Science, in his lecture outlined how is possible to determine the structure of nanocrystalline materials with a high degree of accuracy. Lectures relating to new advanced imaging techniques, e. g. of Ian Gilmore from the National Centre of Excellence in Mass Spectrometry Imaging (NPL) in Teddington (U.K.) attracted audience´s attention.

A significant part of the conference program was dedicated to applications of nanomaterials in medicine. Stephan Barcikowski from the University of Duisburg (Germany) fascinated by his R&D results in the field of biological applications of laser-generated nanoparticles . The programme of the conference traditionally underlined also the issue of impact of nanomaterials on human health and environment. Alena Gábelová, the senior researcher of the Cancer Research Institute of the Slovak Academy of Sciences, in her lecture explained interactions of the iron oxide nanoparticles with human cells.

NANOCON is a popular conference among novice researchers – this year 40% of the doctoral students were among the participants. The prize of Dr. Tasilo Prnka, the conference founder and the promoter of nanotechnology in the Czech Republic, for the best lecture of young scientists under the age of thirty three years was awarded to Semir Tulic from the Vienna University for the talk describing the possibilities of catalytic reaction of nickel-based films with diamonds.

In the poster session 200 posters had been performed. As the best one from scientific content and graphic design point of view have been assessed the poster of Michal Šrámek from the Institute of Molecular Genetics of the CAS (CZ) illustrating the promising application potential of surface-treated gold nanoparticles in medical diagnostics and therapy. Among the top three the poster of Oliver Beier from the Jena´s company Innovent (DE) describing methods of preparations highly active photocatalytic surfaces for temperature sensitive substrates based on titanium dioxide and zinc and the poster of Štěpán Potocký from the Institute of Physics of the CAS in Prague dedicated to the histological and microCT study of diamond-coated metal implants.

The conference NANOCON'17 has a stable place in the Czech nanotechnology community's calendar. In total 16 universities,  12 research institutes of the Czech Academy of Sciences and other research organizations, such as the University Hospital at St. Anne in Brno, the Food Research Institute in Prague,  the Czech Metrology Institute,  the Institute for Drug Control or Public Health Institute. "This year's NANOCON,” says Radek Zboril’, the director of the Regional Centre of Advanced Technologies and Materials. As the chairman of the conference he is pleased by the growing interest of experts from abroad to establish cooperation with Czech experts.

„This year the conference confirmed the global trend of significant shift from fundamental research into nanomaterials towards applications and to the optimization of the most progressive technologies", says Professor Radek Zbořil, the Director of the RCATM Research Center. As a chairman of the conference, he appreciates that nanotechnology is penetrating industrial practice and that Czech science has made a significant contribution to this trend.

Jiřina Shrbená, Chairlady of the Program Committee of NANOCON´17

Download
KOVAŘÍČEK Petr J. Heyrovsky Institute of Physical Chemistry of the Academy of Sciences of the Czech Republic, Dolejškova 2155/3, 182 23 Prague, Czech Republic, EU
Co-authors: KALBÁČ Martin
Abstract: Graphene is a material of great potential in a broad range of applications, for each of which specific tuning of the material’s properties is required. This can be achieved, for example, by covalent functionalization. [..] Read more

HYBRID COMPOUNDS BASED ON GRAPHENE OXIDE AND THEIR COMPOUNDS WITH METALS

THE HYDROGEN PLASMA DOPING OF ZNO THIN FILMS AND NANOPARTICLES

Download
WIENER Jakub Technical University of Liberec, Liberec, Czech Republic, EU
Co-authors: PRůšová Maria
Abstract: Acrylic fibres can be used as a source of carbon structures. The reason is in chemical structure and thermal behaviour of acrylic polymer which is not melt-able and contains high quantity of carbon. [..] Read more

Download
BAŠINOVÁ Nikola Institute of Photonics and Electronics of the CAS, Chaberská 57, 18251, Prague, Czech Republic, EU, basinova@ufe.cz
Co-authors: ČERNOHORSKÝ Ondřej GRYM Jan MAIXNER Jaroslav
Abstract: Zinc oxide nanorods as a potential material for nanoscale devices are prepared by chemical bath deposition (CBD). The effect of the quality of the sol-gel deposited seed layer on the vertical alignment of the nanorods to a silicon substrate is discussed. [..] Read more
Scroll to Top