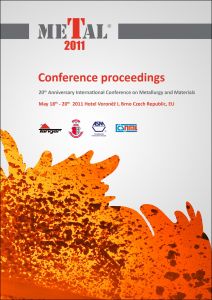 20th annual conference METAL 2011 was held on May 18th - 20th 2011. The organizers of the conference, particularly with regard to the growing interest in the last two years, have changed from a ten-year stay at the hotel Atom in Vítkovice, over a six-year place in Hradec nad Moravicí, one year at the hotel Relax in Roznov pod Radhostem, to the hotel Voronez in Brno.

The participants presented 235 papers. 3 lectures and 2 commercial presentations were prepared and read in the plenary session.
At the symposium A, in total 31 presentations were presented from the originally planned 33 presentations in three half-days, of which 8 were foreign presentations (Poland, Spain, Slovakia, and one foreign commercial foreign company operating in the country).
To the symposium B, in total 40 presentations were accepted, divided into three half-days. Structure of the symposium participants was as follows (taken by lectures): employer´s country of the main author Czech Republic 29, Russia 5, Kazakhstan, Slovakia, Poland each 1.
The symposium C had, within the presented contributions, only 5 foreign guests (Poland, Romania, Mexico, Iran) from 41 papers. For lack of time, 8 posts were moved to the poster session. In the poster section, in total 20 contributions of 22 were presented.
The symposium D had registered  in total 37 lectures and 4 posters, therefrom 8 foreign presentations and 1 poster. It was read in total  36 lectures. Lectures and posters were of the states: Czech Republic, Slovakia, Iran, Poland, Romania.
Talks of the symposium E were held in accordance with the specified program, which assumed the presentation of 56 lectures. Within the negotiations in the individual program blocks, in total 48 lectures were presented (8 registered speakers have failed), thereof six lectures abroad (1x Poland, 1x Slovakia, 4x Russia). Foreign participants were 11 in total.
Symposium F at this year's conference appeared for the first time. Even despite of this fact, it enjoyed the interest of many participants. In total 40 papers were accepted, 36 papers were announced, thereof 4 in the poster section. Pleasantly surprised by the participation of 14 foreign participants (10 from Poland and 2 from South Korea and Slovakia).

On the second day of the conference, the poster session was held from 18 hours in the lobby, where 53 posters were presented.
Within the poster session, the Price for 3 best posters and 5 further certificates of merit were declared.

The first day was held social evening with wine tasting with accompanied by dulcimer music Palava. The following evening took place  Beer party. The second day of the conference was held the accompanying program - excursion to the company Bodycote HT. Ltd., excursions to the brewery Starobrno, cruise ship on the Brno dam with tour of the castle Veveri, visit the Castle of Austerlitz and tour at Labyrinth under Vegetable Market.